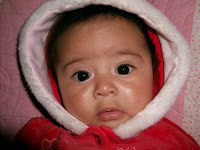 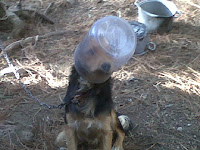 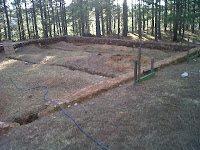 We got Karen and her daughter about 2 weeks ago. Karen had just turned 15 when I went to the court house They phoned me and said they had a special case. Karen was holding her baby and was looking angry, bewildered, and scared at the same time when I arrived. It is that look all new mothers have when they understand clearly that this baby is totally their responsiblity. It can be an overwhelming realization. She had just gotten her baby back from someone who had said that she wanted to help Karen. The woman made her leave the house without her baby at Chistmas time. Thankfully she got her child back.


Our house is filled with diapers, bottles, pacifiers, milk spots on the red cement tile and the like. Karen and the baby are living with me right now. She is receiving instructions on everything that I can think to tell her about how to be a good mom. I have girls who figure out a ways to get in to see the baby. My girls are very creative. They would totally take over the baby if I
would let them but Karen needs to rebond with her baby because she wasn't able to be with her for the past month. The girls do help Karen, when she needs to get a bath or do something personal They are eager babysitters for sure.

Mainly though, I feel like I am watching this 15 year old grow into a responsible young woman. She is taking her time getting there but I do see some progress. She told me that her mom told her that she needed to go to the city to get work at twelve years of age. Her family had a lot of issues and she basically lived and slept out side of her house in a remote village hours away from here. She left home at 12 and got work keeping other people's houses. She got pregnant at the end of her 13 year, and had her baby at 14 years of age. She never attended school, so she doesn't know her alphabet or anything else having to do with education.

We got her a baby carrier so that she can take her baby with her to school. She straps on the baby and gets her used book bag and hikes up to the school with her baby bottle thermos tote and her new pencils and notebook paper. She came home so excited the first day. She was writing her letters and had spelled her name for the first time. She ran in like the first grader she is. "Look, I wrote my letters and my name", she exclaimed. "I have homework, so I need to get busy copying my letters". So she got her baby ready for bed, boiled the water to wash the bottles and filled the bottles with formula. She sat down at the table and was working away, head down engrossed in what she was doing. I got up from the sofa and noticed she had the baby in her lap facing me. The infant had a look of "whatever" on her face. Karen, the mom, was so busy working I walked over to see what she was doing. She was coloring a coloring book with her baby sitting on her lap. I wanted to weep.

She has come a long way. She doesn't give her baby plastic bags to play with anymore. She doesn't leave her alone anymore with her bottle propped. She doesn't leave her on the bed alone, as she almost rolled off a few times. The baby is very strong and is moving everywhere. Karen is very helpful and wants to do everything the other girls are doing. Right now the girls are picking coffee, gathering firewood and picking up rock for the adobe duplex we are building. She got pretty maudilin the other day because she can't just set the baby down and go off to be with the girls. Haley has been great to watch the baby so she can interact with the other girls. Both mother and baby seemed to be settling in very well. She and the baby are doing well.

We are almost though with the adobe foundation. It has been three times the work than we anticipated but we can finally see how it is coming together. Meanwhile, we have some young men making adobe to make sure we have enough to build the duplex. Our team will be here Monday. The locals say that you can lay 3 courses of adobe and then you have to wait a day or two dependant to lay the next round. I have learned a lot about adobe. It is a great medium and has been used forever in homebuilding. Block was very populare in these last years but for the money adobe is the way to go. One block cost a dollar usd or 18 limperas. One adobe block cost 4 to 5 limps. As my watchman pointed out, "If someone is shooting at you, adobe is safer because the bullets can penetrate the block." Good to know.

WE were supposed to get rocks yesterday from the farm, but the Isuzu was making a noise like airbrakes, but we don't have airbrakes on the big truck. So I was going to get the rocks in the truck so our guys could get finished with the foundation. But my truck had a flat, which is bad because it had a flat Sunday with no tire store open, and so now I had two flat tires. So I had to take the big Isuzu to town with the two flat tires. We came into town and I scraped the wall to the stadium on my first major turn, with my outside mirror meeting a large bus. Haley and Rosa, my passengers were getting nervous over my big rig truck driving methods. Rosa, said she would rather ride in the back because she wouldn't see what was coming up with my driving. She and Haley were brutal. I didn't break the mirror so I felt fine. In fact the previous drivers of the truck had the mirror welded on to the frame. I feel that this has happened before.

I dropped the punctured tires, dropped Rosa for her appointment, dropped the truck off with the mechanic and then Haley and I went shopping for groceries for the girls and the team and dropped a bunch of money there too. After shopping we went to pick up the girl's Honduran school curriculum. The school they go to has gone up 400 limperas from last year. So we wrestled with that but they had to get started on time so we got it. Then we went back to town, got gas, and went to get Cruz s stuff from the family she was living with while she was going to nursing school.
She had been so excited about going to school last year. She got sick about half way through with an intestinal problem that she just couldn t shake. She did not do her best on two subjects and so the director had an appointment for her to come in and talk to her. The day of the appointment her paternal grandfather died and she had to go to the frontera to the funeral. Then after she got back from her family obligations, she found out that most of the other alumunos had gotten notice of graduation, so she just went home. I was in the States and she didn´t tell me anything about it when I got home. She said there might be a test she could take, but she was depressed that the others had moved on and so she decided not to go back without telling me. Well, I didn´t put the dots together until her landlady Zeyda told me yesterday what the director told her. When Zeyda told director why she didn´t keep the appointment beacause of a death in the family, the director told her there is a possibility for her to return without taking the whole year again. So please be in prayer for Cruz. She has lost another grandfather a month after the first grandfather died. She has been a little down and is praying about what she needs to do. Please pray for the whole famiy

After we got all those errands done we went to Anastacia´s where she is starting her beauty shop back up. She is also making pizza, and cinnamon rolls to sell. Cruz and Lina are launching out a bit and are going to live with her. Next year if all goes well, Lina will go to college. She is taking high school courses right now and a computer class. I want them to have a time where they are living on their own and going to their own church and buying their own groceries, before they are of and gone to college. Pray it all works out.

We left from there and unloaded all the groceries for the farm and team, Cruz´s bed and everything that she had accumulated at school. Then immediately I loaded the girls up to go pick up 10 meters of rocks and get them unloaded at the building site. The girls have made a herculean effort in helping get this project ready for the team from Pennsylvania. We have several teams that are coming back to back. Please pray that everything go smoothly. I am finalizing bus schedules, and activities while they are here. Teams are great in that they get so much done that I can not do with repair and building, evangelizing or whatever they have come to do. Mostly though they are wonderful with the girls and the girls have established great friendships with so many wonderful Christian people.

Be praying for everything to go smoothly. Thanks to all of you who send letters, and call, and support us in so many ways. Blessings, The Super Busy Honduran MOM.
Posted by Honduran Home at 9:58 PM