I had a great time with all my girls(but one) in January. They told me that they were going to Canada in October. We didn't have any teams so I thought that might be a good time to go, but then because of some scheduling problems, they moved the trip to January/Feb. I later found out that they not only were going to Canada, but that they also decided that we would be driving at the coldest time in the year to go to see Washington DC and explore New York City and go to Canada to see Niagra Falls and return to GA in 5 days ! Impossible? You don't know my girls. 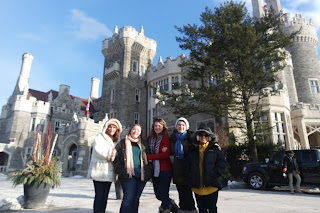 So then I get a phone call and I was told my trip to the States was paid if I wanted to go with the girls. But if I wanted to take them up on the offer, it had to be a surprise and the girls couldn't know. I have been really busy with coffee picking season, school getting started again, getting kids registered, teams and a whole host of stuff to do. However, that week was open. Every objection I had was countered by this couple offering the trip, with a solution. So I decided to pray about it. The dynamics of the trip were crazy, but the Lord reminded me that it was going to fall on the 1st anniversary of my mom's death. He reminded me in my prayer time, that I had been trying to get my mom to go on a trip with me for years, but there was always a reason why she couldn't go. Then it hit me, I was being my Mom. I knew how frustrated I was trying to get my mom to go places, and now I was doing the same thing. So I agreed to go.

When I got on the bus station at 12:00 to start my trip they were leaving early and apparently I was late. I had some other last minute things to do before I left town, but I just got on the bus. I was still telling myself that this was the craziest thing I have done in a while. As we were driving down the mountain, I realized that we were going extremely slow. I was thankful my flight was for the next day, because at the rate we were going, I would have missed my flight. I changed my seat, (which I never do) to the front seat when it became unoccupied. We were going so slow, I didn't think we would arrive in San Pedro Sula before dark. Normally it is a 3 ½ hour trip. I was getting worked into a negative mood as the trip kept stretching on, until finally when an older woman got on the bus and took her seat beside me. Then the bus driver threw it into high gear and we were zooming down the road. I found out that the driver can't sit and wait for anybody, but he was doing a kind thing in picking up this lady, who had just left the hospital, and transporting her for free about 20 miles up the road closer to her home. She talked faster than anyone I have ever met. Basically she had diabetes and she had complication with ulcers on her legs, and she was alone. She said she had family, but no one ever came to see her and that her kids never did anything with her or never wanted to be with her. I was sorry for her and thankful that my kids wanted to be with me. I asked the Lord to forgive me for my attitude towards the bus driver, who was doing his best to be kind to this woman who had so many problems in her life. I encouraged her when I could get a word in edge wise. She thanked me for listening to her got off the bus and told me to come see her one day.

We drove down the road about 10 miles and a young woman stood up with her little daughter letting the driver know that she needed to get off. The woman had a hard look about her for her young years, but her little girl was a doll. She was about 2 years old with her little hair done in two pony tails on the top of her head. She had on a red t-shirt and a blue jean mini dress. She was “cuteness in the extreme”.


She walked off of the bus and her little girl followed behind. I was watching her walk along the side of the bus. The mom was getting her stuff under the belly of the the big Mercedes bus. The little girl unattended was dancing freely in the grass to a tune she had in her head, excited to be off of the bus. I was thinking about how excited I would be to off the bus myself. Then something caught her attention at the head of the bus. She speed up her walk as little ones will do, alongside the bus and was headed to the road, and the bus driver hadn't come to a complete stop. He was just rolling very slowly along. I had my metal water bottle in my hand, and no shoes on my feet. I lept over the older woman sitting beside me on the my seat. She didn't see the little girl. I stomped down the bus steps like a crazy lady and slung my metal water bottle against the dash so I could guide myself down the steps. I jumped out of the bus and got to the head of the bus and I don't know if slinging the water bottle against the window, but as I hopped off the bus she had turned from the busy interstate highway. I saw her cute little face poked around the right side of the bus, and she saw a wild looking gringa. She looked at me and I looked at her and I took a small step toward her, hoping she wouldn't run in front of the bus to the highway, but thankfully, she walked towards the grass looking suspiciously at me the whole time, but now she was looking for her mom. The lady saw the last little bit of what transpired and she started yelling at the little girl to come to her. I felt like Superman, with my hands on my hips, hair blowing in the breeze of the passing semi-trucks thinking, “My job is finished here”, and stepped back on the bus, with people congratulating me about saving the little girl. I heard various comments about how fast I moved in my socks, which was pretty funny. The bus driver said thank you and I just felt empowered, until I heard that the mom had a belt in the crate she had retrieved and was using it on the little girl, and the bus pulled away.


I arrived at the bus terminal and I had gotten my shoes on and in my haste to finally get off the bus, I left a bag of personal items on the bus. When I realized it, I didn't even care, I didn't go back. My ride was there and we arrived at the missionary hotel. As they were bringing my luggage in, they said, “We need to go to a funeral of a little boy tonight. I think you know him.” I told her, “I don't think so”. Then suddenly she was giving me the information of another missionary family that I know that was helping this young woman adopt a little boy with special needs. I did know this little boy and I couldn't believe he had died. This young woman was soon to be married and because the adoption had not taken place at that time, she ran to the States to have her wedding shower. This excited “bride to be” had to exchange her joy for a place of such sadness as a grieving mom and deal with the loss of her son. So I put my bags in my room and went with the missionary couple to the funeral downtown.

After I got back to the hotel, I was reflecting on my day and my week. A few days prior, I wasn't planning on going anywhere, and suddenly I had a destination to Canada and a plane ticket to do something that was totally crazy sounding. I had gotten out of our truck, and suddenly the bus was leaving and I was there at the bus station, just in time. The fact that we waited for the woman who needed a ride and an encouraging word, in the timing of the Lord, and then suddenly there was a baby to rescue, and then suddenly there was a funeral of another sweet little child. I remembered the book of Mark, where the disciples were hanging out with Jesus, suddenly ministering to folks, getting on a boat suddenly, and suddenly ministering to a man with demons. Mark says the word “suddenly” a lot. When you are moving and living, “suddenly” is a great adverb and the phrase “just in time”, become normal. I wished I could be that in tuned and sensitive to God everyday, that I would see Him using me every where I turn and wouldn't miss a thing. I was thankful that I was where I was supposed to be that day. I was confident that I was supposed to be on this crazy trip, where before I was just hoping I hadn't missed God. God gave me that “blessed assurance” that He is always right where I need to be.


I had a wonderful trip with my girls.  We went to Washington D.C. for the first night, New York City the second night, Niagra Falls,
Canada the third and forth night and drove all the way home to Georgia on the 5th day.  We called it "Extreme Tourism".  I hope that you see so many of God's special plans that God has for you today. Blessings from the Suddenly but Just in Time, Honduran Mom.

Posted by Honduran Home at 8:34 AM No comments: