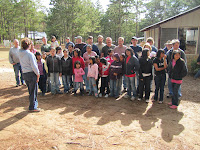 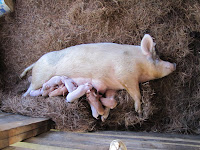 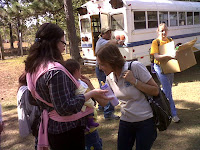 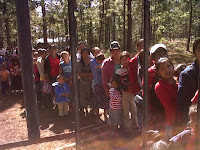 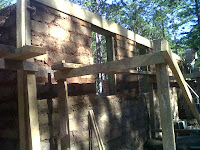 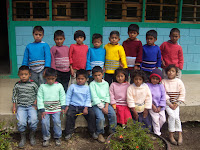 
Yesterday Haley and I went to pick up the team. We loaded up into the local bus line and went public. Public is when you stop every so often and get new passengers while others disembark. Sometimes people selling fried fish or portable toothbrushes, or a wonder pharmacutical miracle, get on the bus to hawk their wares. There were so many people on the bus one time, that when I woke up from my slumber, there was a woman's rear area in my face. That has never happened before. It was a tall but large Honduran woman.
We got to the airport my administrative assistant went on a fast food blitz. She ate Dunkin Donuts first, then Wendy's Spicy Chicken and to top it off a Expresso Americana chocolate concoction that includes oreo's and the equivalent of whipped cream from 12 dairy cows. She had been waiting for quite some time for this gastrinomic delight to present itself .
Our team arrived and they too, had found Wendy's Spicy Chicken. This time we took a bus direct. On the way back home I am chatting with the new team members and I get this phone call from the farm. It was Ben the director of the school at our mission. He said that the last of our three mama pigs, was having her babies and handed the phone to Angela, our twelve year old. She was so excited, speaking in Spanish in three octaves than normal. I couldn't understand her except that she was saying something about the baby pig's leg. In my calmist voice I asked her to give the phone back to Ben. He was in the pen with the sow. He was talking odd and I found out later that he couldn't hold the phone because he had certain material on his hands from working in the pig pen. He finally told me that one of the baby pig's leg was delivered and that was all, so I told him to pull it out, thinking it would be dead, but it wasn't. We were all excited about pig delivery by phone.
Then I get another call from another missionary whose bus had a flat front tire. So I asked our direct bus drivers if they could look out for him and help him out. They found the bus, and had all the right equipment to help him change the tire. We were running a little late but we were back on track.
We got to La Esperanza and it was raining again. Rainy season usually starts at the end of March or the first of April. This year it started in February! People here including myself, had adobe buildings going up, coffee drying in the sun and other projects. When the rains started all of that came to a halt. Fortuanately for us a team from Pennslyvania came the first of February and got our adobe walls to our duplex up in record time. We are now trying to finish the walls out with stucco. This duplex will be used for interns who are coming to help us with the girls and with this mission. There is good news about the rain. A team came in December and planted corn and beans. I didn't think that they would live because we were in the drought season of year and it hadn't rained since October. Two months later now at the end of February the corn and the beans are cracking the dirt and thriving. They have had no rain since January and they still came on up out of the dirt. I am amazed and thankful.
We unloaded the team's luggage into the yellow school bus I had hired, and after they got the luggage loaded they said they wouldn't be able to carry me to the farm. I asked why not and they said because it had been raining all day. Well, I just looked at the driver and his assisitant like "Oh well, perhaps I won't pay you the full price if you just get me half way home in the dark on a rainy night." It is amazing what your eyes can communicate when necessary.
The bus drivers got us to the entrance and Ben met us with the flatbed and the Nissan. It was just drizzling rain at this point. I got the ladies from the team in the truck and took off down the road. I get to our gate and our watchman, who I call "Barney Fife"because he carries the shotgun shells in a plastic sandwich bag in his shirt pocket. He was not there to open the gates for us. We are all sort of damp, and needing to use the facilities and very exhausted and now there was no watchmen to let us in. I had left my keys at the farm. I knew Barney was in the area because he had just let Ben out the gate to come get us in the flatbed. I was on the phone with Ben and heard him tell the watchman that they would be right back.... It didn't register with Barney. So I am yelling out the door and finally one of the girls comes and unlocks the gate. I drop those ladies off and go and get some more team members. As I pass by the small gate up top, Barney was patroling up above by the small entrance. Nobody was going to use that gate because it was raining, the roads were full of water and they couldn't get out of the vehicles, but he was on the job.

When I got to the top they were still unloading the suitcases from the bus to the flatbed. Everybody piled in and we got back to the main gate. The team met the girls and ate supper and then we loaded back up in the vehicles and drove to the mission house to unload the luggage into the weary team members hands. I am thankful for the safe journey and for team members who were prepared for the long trip. They had been up since 3 o'clock in the morning the day before and finally arrived at their destination at 8:30 the next evening. God has been faithful to us.

I wanted to thank Currie and Sandi Burgess for sending their medical team to help us in our area of El Obispo. They brought 14 doctors and assistants and they all did a wonderful job helping the people here in the mountains. Also I wanted to thank Jeff and Nancy Evans and their team for their hurculean efforts in getting those adobe walls up for the duplex, building two fish ponds, and assisting in making a bathroom for the church. I would also like to thank Jim and Linda Rowan for leading a great team to minister to the school children in our area, as well as the children here at PTC.
Continue to pray for us in this season of teams. The girls have been so helpful with the teams, serving in the kitchen, loading rocks, and helping out with the cooking. The girls and I are feeling how blessed we really are. Thanks to the grandmother who made all those sweaters for the mountain children. I can't tell you how fuln it was to be able to give those away to children who had nothing on their arms and the temperature was falling.
Thanks to our interns, Haley, Ben, Morgan and Clayton, and Natali, who are blessing our children everyday, showing them how to be called of God.
Finally thanks to everyone who prays, helps and supports this ministry. Pray that God continue to bless and keeps us, be gracious unto us and give us peace. Blessings the Bus-traveling Honduran MOM.
Posted by Honduran Home at 10:11 PM