Merry Christmas to Everyone 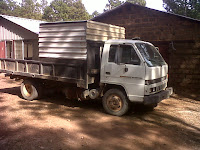 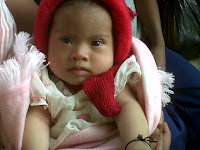 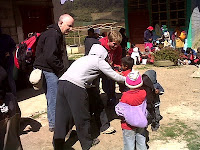 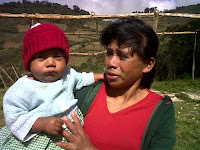 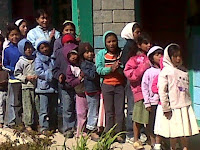 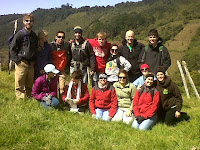 
We have had such a hectic time here at the farm this month. December is usually busy because we pick coffee and have to create Christmas for 24 girls. This year however, we had a team from Crosspointe Church come down and minister to our community a few days before Christmas.
The team brought all these book bags filled with useful things for the school children and also other things that maybe are not so useful, like candy. The kids loved the back packs and we all enjoyed handing them out to so many children.

It was so cold on our first trip out with the team to Sacate Blanco. It is 7500 ft about sea level. Many people believe that because we are in Central America it must be hot. Not true. The Project Talitha Cumi girls live at 6000 ft and it stays pretty chilly here. The children met us there and we sangs songs and just enjoyed celebrating Christmas with one another. We ministered to a lot of children, but not all of the children were able to come. School is out this time of year, and it was hard to get the message out to all of the children who live in this remote mountain village.

The Crosspointe team had some great travel experiences while they were here. They got off the plane and got loaded onto a public bus line. It was a little slow going because of all the holiday traffic this time of year. They stop at many stops along the way to pick up waiting passengers. They finally arrived in La Esperanza, our nearest town and capital of the department (state). It was so cold the night they arrived. Then they unloaded their supplies from the public bus and put it on our bus. Don Chilo was driving and is in charge of keeping the vehicles of the farm operational. However, this time he forgot to put diesel in the bus. They ran out of diesel about half way to our farm. Chilo siphoned the gas from our little Nissan that was there as a support vehicle. It got the team to our farm.

We thought we were going to Yasi the next day, which involves an extensive hike from the back of our farm down into the valley below. Somehow wires were crossed and we weren't going to Yasi. We needed to take the bus up the mountain to Sacate Blanco where children and their parents were patiently waiting for an hour. If I had known we needed to use the bus, I would have gotten Chilo to take the small truck and get some diesel when he first got to work, but now it was two hours later and I needed to change plans with the team, and I need to get to town. I told Chilo to go ahead and I would meet them at the crossroad.

I drove back to La Esperanza to get diesel. They were having a annual Christmas fair in Yamaraguila and there was a traffic jam!! I turned up a road I thought would get me out of the jam, but it was filled with mountain people trying to sell their wares. I just had to wait it out. You can't drive fast over these roads because they are so rocky and have tons of potholes. So I thought I will just listen to my Ipod with my praise music. Well, I had it in my coat and I must have had the earbuds dangling out of the pocket and I had crushed one of the earphones when I had closed my truck door. I was determined to praise the Lord through these circumstances and stuck the one good earphone in my ear. I listened about 5 minutes and then my Ipod died.

My first stop was the Texaco station and then I had to get a few things for the trip and went by the store that is right across the road. I ran in the store and got water bottles and some other requested items. When I got out of the store, the clerk motioned towards my back tire. It was making a hissing sound. It was not flat yet but it was definitely on its way to "flatland". I jumped in the car and drove to the local tire repair hut. I got there fine, and they charge me double, and got me on my way.I got to the crossroads and met the team. We dumped the fuel in the bus and took off. The scenery is fantasic in this area.

When we arrived at the top of the mountain on an empty soccer field, steam began erupting from the hood of the bus. I don't know much about cars, trucks and busses but I do know that this is not a good sign. Chilo not only didn't check the water, he didn't check the water either. So we had what is known in the auto mechanic world as a blown head gasket.

So now we had a team, that needed to get from point A to point B and I didn't have our bus. So I was going to rent a 4x4 but the guy who rents his truck out was drinking that day. The reason he rents his truck out is because his license had been revoked. I did have a flatbed trailer. It worked out fine the next day in the trip to Inguanis. We put old pew cushions on the floor of the flat bed and the team had a rocky time of it, but the scenery was incredible. The team hiked down this mountain road, while I took the option of going with the borrowed 4x4 sent by the mayor of Yamaranguila with a driver. We are trying to colaborate with the mayor to reach the people of Inguanis and Picacho with much needed assistance in almost every area. We passed out clothes and rice and a book of John to all the people who were waiting below. I had brought seeds from the USA that were donated by local farmers in Doerun, GA .

The people were thrilled to get all the goodies that we brought to them. We tried to sing songs with the children but they didn't even know the simpliest songs. They are wide open to hear the gospel message. They loved the songs, and I told them I would be back to bring others to help them. We had a great week with the Crosspointe team but when it came to leave there was a problem. they had a lot of people and we only had the flatbed and the little truck. They had to be at the bus stop at 4:30.

They got ready very quickly that morning, after they discerned that nobody's alarm went off. They piled into the flat bed with their coats and the blankets from the mission house. I had made them some banana bread "to go" and followed behind in the Nissan pick up with some of the other team members. Chilo was driving so fast down the road that we noticed things falling of the truck, i.e. mirrors, that we did stop and pick up . Haley and I left the Nissan at the bus station and rode with team who took the next bus, and they made their flight.

I have learned a lot of things when teams come. One of those things is that I have found out that y9u can not get a bus fixed during the Christmas /New Year's Holiday.. The days after Christmas we had or next team. Again, we picked them up with the flatbed at the bus stop. Dust was so thick here because of dry season, we had to turn on our lights during the day just so that people would be able to see our car. The team arrived coated in dust, and wrapped again in covers because of the cold. Once in our riding back and forth this week from here to town, I saw a dead man in the road. He was face up, mouth opened and looking straight into the sun. Normally if it was a person who was drunk, they typically fall in a fetal position for hours. I don't know if the man fell off a overcrowded back end of a pick up truck, or if he fell walking and some on ran him over because the dust was so thick no one could see him on the road.. It was a horrible site.
When it was time for this team from South Carolina to leave, I called to get the times for the bus departure, and the owner said, " I am sorry, we don't drive on New Year"s Day. So we needed a way to get the team from our farm to San Pedro Sula three hours away. Jimmy Potts took the iniative and russeled up two bus seats that he welded together and placed them against the outside wall of the cab. The men worked furiously New Year's Eve. We all called them the A-Team. Then they got some roofing metal and made a covering to set over the bus seats as well as to have side panels that were welded on to the new roof. They bolted and nailed everything in place, put the old donated green pew pad on top the old bus seats, and voila' "create-a-ride". The structure took on a "Beverly Hillbillies" tone, but it was very serviceable. Our Christmas holidays were so great. I thank everyone who sent cards or gifts to the children. The girls were tremendously blessed this Christmas. Thanks to Crosspointe Church for the back packs that were distributed to the many Honduran children here, Thanks to Randy Cox and Rich Foster for getting the Container with all the goodies on it down here to Honduras. Thanks to the Moore family and their ministry to our girls this month with their team. Thanks also to Tom Osborne and his team who came and revamped our farm as well as made wonderful relationships with our girls. But most of all thanks to Jesus for all He has done for us.

Please continue to pray for the 3 missing girls. I go again tomorrow to see if there is any news.Blessings, Pam DeMott the Thankful, Hopeful, Hillbilly truck driving Honduran Mom and all the girls from PTC

Please go to our blog http://www.myhonduranhome.blogspot.com/ to see some of the photos!

Posted by Honduran Home at 9:27 PM