What's Under Your Refrigerator? 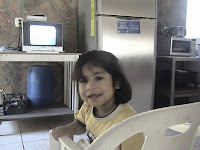 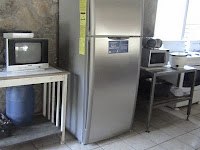 We had a team from GA this past July. They had lots of people and we got so much done. While they were here they noticed we needed a few things for our central kitchen and my house, which as much traffic as I get through my kitchen, it is the same thing. They recently sent a donation for us to get a refrigerator, stove, washer and dryer.

I took the money and I bought a big shiny, silver looking refrigerator. This particular refrigerator had a promotional and it came with a new TV. We needed something for the little ones to watch Baby Einstein, and other educational videos in the kitchen, while the big girls are schooling up top. I just hope our two lady workers, don't get hypnotized by Baby Einstein.
I also bought a microwave for the central kitchen, a electric can opener, a rice cooker, a waffle iron.

For my house I bought a stove, and washer and dryer. We have to keep the laundry room behind the kitchen locked because sometimes the older girls wanted to do all their laundry in the same load. It caused our machines to break down and they stayed in a constant state of "broken". All the girls that are 12 and older must do their own laundry at the pila, which is like a cement washboard. They hang it on the line and if the weather is bad and raining they get to put them in the dryer. Unfortunately, one of the new house moms put clothes that were still dripping from rain water into the dryer. It has not been the same. With the new machines at my house we can keep a better handle on the condition of the clothes and the clothes handler before we wash or dry them. Thankfully we got the ones in the laundry room repaired last week and Sylvia our worker is still using them.

While we were getting ready for this huge blessing, We decided to go ahead and move the refrigerator. Our refrigerator came from I know not where. It was a used refrigerator when it was purchase with a little rust on the door. After its service to our kitchen with the airy moist nights the little rust grew into a lot. It looked like a refrigerator that had been on the deck of a fish bait store on the gulf coast after a few hurricane seasons. When we moved it away from the wall, we saw a frightened rodent scurry away, and a whole lot of stuff that had accumulated under the refrigerator. The floors get swept and mopped at least 4 times a day. I have no idea how that quantity of dirt and debris got under our fridge. I was so thankful that we moved it before the appliance store delivered the items.

We got busy cleaning that up and when we did it looked so much better that it drew our attention to the wall that was behind the refrigerator. It was a mess. The stove is close by and so all the steam and grease apparently blew behind the fridge and dust and other things that had been spilled down the back was attached to the stone wall. So we jumped on cleaning that. We mixed laundry soap, hot water and who know what else Sylvia put in there but when I got back with the ajax from my house, she had a broom and a bucket scubbing the hound out of the walls and Dina was scooping up the rinse water with a dust pan and another broom. I was thinking the delivery guys will be here any minute. While I was doing some cleaning on the stove, because it started to look bad against the cleaness of the washed walls, Dina started scrubbing the walls of the other side of the bar. We know had everything in a royal upheaval. I was mortified at how much stuff we were having to scrub. How did we not see this before?

Well, while scrubbing away, I got to thinking about how that refrigerator was like life in general. You have this body and because of the elements of life you begin to show some cosmetic problems. No matter how much cream and special cleanser you put on the exterior, it is the "elements" are always working against you. but thankfully you are still working pretty well inside. You are doing what you are supposed to be doing. Then things inside where people can't see start being affected and breaking down and you are not keeping things as cool as you used to, not working at your full potential.
Then right in the middle of waxing philosophically eloquent, God started working on my thought process. I don't know about you but I try to pray and read my Word and maintain my spiritual life , and even though I am attending to it on a daily basis I am not checking for the crud that blows my direction and gets stuck underneath where I don't bother to check, and before you know it, rats are trying to build a home and eventually will get in the motor and shut you down.

This week I had a revelation that I needed to get over myself. The next revelation was, who cares what is in my wallet, I need to find out what is under my fridge! The third revelation is that I don't get on my knees anymore unless it is something huge I need to pray about.

God brings something new in and you move the old out, but when you move it out, you start noticing other things that are just not up to snuff either. You start cleaning on one area and are feeling pretty good about it and that just makes another part look even more needy. All the while you are frantically wondering who is going to come in and see what trying to scoop up off the floor! Which brings me to my first revelation which was to get over myself . Who really cares but God. I want to have the courage and the time to look underneath and bring in The Health Inspector to keep a check on my condition. The only One who really cares, is the Lord, and He does not condemn me or shake His head in disgust. He knows my name and my frame.

I know that the Word says that in Him things are new every morning. If we can focus on the new things, it would shine a light on the things that really need to go. That being the case, if we really took time, He would probably mention that we needed to check under the fridge, for those things hidden even from ourselves. Sometimes when I know He is trying to get me to take a "look see", I am so busy getting things cooked up that are really good things and will bless other people and by the time I finally get out of the kitchen, that I don't bother to look because I am too tired. But you know if I would do that third revelation about kneeling before Him from time to time, I would get a glimpse of what is building up under my fridge.

Anyway, I thank the folks who donated all the lovely appliances to us. They are wonderful. The girls were so thrilled and excited over every item. Everybody including the men and lady workers felt like it was an early Christmas. I thank the Lord that He still working on me. Blessings, the Honduran Mom with a New Look.
Posted by Honduran Home at 2:07 PM