From One End to the Other 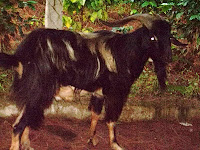 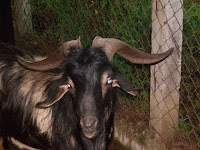 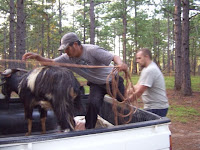 Well we finally found a billy goat for our goats. We had gotten some regular scrub goats last year hoping to get a good quality billy and upgrade our herd. Our hope has been for a long time to supplement our milk needs and to help the community with goat milk. Last month a young mother came asking for help for her new infant. She had been in the hospital for 15 days to get her milk to come in. It never did and the hospital sent her home with no milk. I gave her some money and told her to come back with the receipt then I would give her more. Then I went to the store and found out that one can of formula cost about 15 dollars a can! I didn't give her near enough. She never came back I hated that I didn't her enough money. I had milk goats in the States and knew that goat milk is very good to give a new infant. So we went looking for a billy goat for our does.
I couldn't find a billy to buy and so at the first of the year we borrowed a goat. During the dry season we put all them up at the clinic because the pasture was so much better. Well someone discarded a potato chip bag and the borrowed billy ate the bag and he got strangled on it. So I had to pay for a dead goat. He had been here long enough for one of the 3 females to get pregnant. She had two kids. They were beautiful. One was solid white billy with black socks, and the female was black with uneven waddles on her throat. After 2 weeks someone had come by and cut through the fence and got the little billy goat. So I still had to find a billy. I have been looking for a while.

On my way to Tegucigalpa last week, I stopped at a house that had some goats out front wandering around. I met Don Juan and his wife. He was an elderly gentleman who was hard of hearing and has developed some problems with diabetes and was very sick, and he couldn't care for his herd. There has been extensive road construction and because of the road crews and equipment it has shrunk his already sparse pasture land into a cement carpet. They were moving their herd across the 4 lane highway and a car almost clipped his billy goat and the goat stumbled in the ditch and broke his hind leg at the hoof. The goat healed, but Don Juan had given out of heart to continue to try to keep his goats, so he was selling his herd. I asked if I could see the billy goat. He was huge and a little scary. The pictures don't do him justice. He looked like a water buffalo's b aby. They said his dad was two hands higher than him and was golden, which I am thinking because of his shaggy mane, may have been a Toggenburg. He is a mix between a Toggenburg and an Alpine variety with a splash of "Who Knows?" and is twice the size of my little scrub goats. He wasn't limping and so I ask a price. It was kind of high for around here, so I told Don Juan that I would have to think about it. I didn't want to buy a gimpy goat for more than I should and it was a two hour drive back down the mountain to get him.

Two days later, we had visitors from the States. Sandy and Currie Burgess, who run Enlaces here in Honduras, brought a couple who come by every year just to encourage us. I was telling them about the goat that looked like a water buffalo. They just handed me a donation and said, "Go get your goat".

We loaded up the next day. I had to bribe Haley with a Spicy Chicken Sandwich from Wendy's, Ben thought it would be a great adventure, and so Don Rafael one of our workers went with me along with Rafael.

After I had fortified my crew with chicken sandwiches, we drove to get the goat. We decided his name needed to be Don Juan. When we got to the house and the young boys came ar0und the house with the goat on a rope, Haley backed up a little. He was twice the size of the little ones walking around in the front yard. and she had the same reaction as I did when I first saw him. Ben and Rafael loaded the billygoat onto the truck and tied his horns to the rack that runs along the cab of the truck. Don Rafael and Ben sat in the back to make sure Don Juan didn't try to jump. They also kept giving him water to keep him hydrated. It was a job. When we stopped at the Texaco station to fill up the tanks before we went back up our mountain, the men from the Texaco station abandoned their posts and motorist got out of their cars to make comment on our large goat. Rafael , our worker, was giving all the details while he munched away on his second ice cream of the day.
We arrived home and the girls were just exclaiming over how big the goat was. Most were too scared of him to go to the back pasture where we unloaded him. When he got into the pen we all felt a feeling of accomplishment. We were worn out but "mission accomplished". 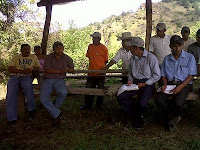 The next day we had a meeting with the people of Inguanis. We drove about an hour to get to their neck of the woods. It was so beautiful there. They don't get much company because the roads are almost impassable and the mayor brought us down to see if we could help them some how. Because they are so inaccessible they don't get many missionaries down in that area to bring medical teams, or evangelistic teams. My group was Me, Don Chilo, our foreman, Pastor Flavio, the new youth pastor that is meeting at our church with about 70 young people, and some boys from the youth group that are combing the mountains to reach people for Christ. The people are sweet humble people who live truly at the end of the road. 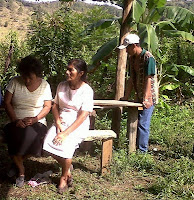 We have been receiving a rice supplement from Kids Against Hunger sponsored by Heritage Church, Moultrie GA, to help the little rural schools in our area. I thought they wanted us to help with that program for the schools. When we got down there they said that they needed to have a project to introduce new crops to the area. It is too late to plant corn, and they wanted to know if I had any ideas. The Mayor suggested soy, and I told them that the farmers in GA grow soy but their main crop was peanuts and cotton and produce. I told them I was coming home to the States this upcoming week and I would ask around and see what suggestions, I could get from other farmers. They have had a crop failure this year because of all the rain. The are willing to re educated their children to eat different type foods.

They need a vegetable crop that they could grow at the school and at their homes. I suggested, collards plants and turnips, which would be a great source of iron. Butterbeans, which don't die off at frost because there is no frost here. They just keep growing. So I will be looking for ideas, from anybody who knows about small row crop farming. 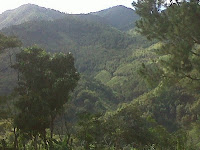 Please be prayin for our mission. I will be home in the States for a month. Pray for the girls and Haley, Ben and Mr. Joe, who will be here in my absence. Blessings, the Goat Buying Honduran MOM, who has Gone where not many missionaries have gone before. It was so cool! (I have tons of photos of this area, it was so gorgeous, but I couldn't get them out of my camera. When I get home hopefully one of my "techy" friends can show me and I will post more at a later date. ) 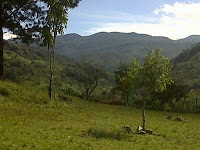 Posted by Honduran Home at 6:02 PM