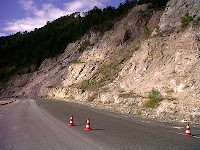 Today Haley and I got up and out to go to San Pedro Sula to pick up a small team in our little Nissan truck. I got the truck checked the day before to see if the oil was okay and to make sure that everything under the body was still holding together. We have had horrible road conditions and those things that could be shaken have been shaken. The day before I went to Tegucigalpa the car made a strange noise and I was determined to get it seen about, but it started raining and there are no indoor garage's here and so I didn't get it checked that day. I promised myself that I would get it checked when I got back.

Well it did need the oil changed and about 5 other major problems, having to do with something called the differential and something about gaskets that held the wheels in place, the shocks of course were gone, and the brake pads looked like large toasted frito chips. I don't know everything that was wrong, but by the serious looks on the mechanics faces, and total strangers that were passing by listening to the tale of my car's woes, they looked suitably shocked that I had been driving it all over the creation. One of my friends told her grown son how brave I was to drive to Tegucigalpa in my truck. I am thankful God has been watching over me and my ignorance of cars.

So we got up early to pick up our team. We got about half way down the mountain and we got stopped because they were working on the roads. High above was a bulldozer on the top of the mountain pushing loose rocks to the roads below. I saw the others go when they were flagged. When it came to my turn the guy with the red flag looked like he was having a low blood sugar day. I could't tell if he was waving the flag for me to go on or just couldn't hold the flag up anymore. Anyway, I cautiously went ahead. Haley was helping me watch when the dozer was going to send some more rocks down. Two Honduran men came up to the truck and told me to take off like a bullet and the rocks wouldn't get me. I thought to myself, "Then why aren't you in your trucks right behind me?". They said , "Go ahead and go". I hesitated and I am thankful that I did because rocks the size of basketball came down the mountain side and kept going across the highway on to the other side. I would have been nailed and had a large dent in the car. I finally took off like a bullet and went down the road.

We arrived early even with our delays. We went to the bathroom and it was crowded. There was this tiny little bathroom monitor. She had on a little red uniform and she wore large framed glasses She was wiping down the bathroom sinks. At first I thought she was a child, but she was a grown woman.

I was patiently waiting my turn. Haley came out of the restroom simulaneously with someone at the next stall. Haley told me that there was no more toilet paper in the stall that she had just departed from. I don't know how but the little bathroom assistant knew what we talking about use. The lady who had entered the adjoining stall seemed to be in a hurry, but this little 4 ft lady walked into the stall with her and told her she needed some tissue. The larger lady was in a hurry and so she rolled off some tissue and went to hand it to the clerk. The littler woman said "No that is not enough ". So the lady, who now was in a great hurry, was just snatching the roll with great fervor just to get this small fiesty attendant out of her stall. Tissue was all in her hand and splilling all over the floor. The little attendant took on a military type voice and said "Okay that is good" and she turned around to me with a big smile on her face and handed over this wad of toliet tissue for me to use.

I appreciated her work ethic and the fact that she was trying to be helpful, but I would have preferred to handle my own tissue instead of two other folks handling it prior to me touching it, and I didn't care to use the part that went sprawlng all over the tile floor. I told her thank you and took the tissue that was offered. I made sure I noted where the lady held the tissue and the longer draping tissue that was on the floor to make sure that I didn't use that part of the tissue offering.
One of the first lessons in mission work is that you carry your own tissue, black ink pen and a bottle of water. I guess I have been on the field too long and I am getting sloppy about remembering the simple things about mission life. I need to be thankful for an attendant that wanted to come to my aide and to be able to use a clean bathroom. I need to be thankful that there was a bathroom!
I am thankful for trucks that are repaired, safe trips and energetic bathroom attendants. I want to remember to give thanks in all things. Blessings from the Thankful Honduran Mom
Posted by Honduran Home at 10:52 PM