Can These Bones Live??

Yes they can.  Bones are important.  Definition: A bone is any of the pieces of hard, whitish tissue making up the skeleton inhumans and other vertebrates.  The substance of bones is formed by specialized cells (osteoblasts) that secrete around themselves a material containing calciumsalts (which provide hardness and strength in compression) and collagen fibers. The support our human frame when all is working as God designed.  We found this out when the team from Friendship Baptist Church came to visit us the day after Christmas.  This church has been keeping this date after Christmas open to visit Project Talitha Cumi for the last years and we all look forward to their visit.

This year the pastor and one of our SIKM board members, brought his family down with him. Tom has been on our board for the last 6 years and his son had been to the farm a few years before and was so excited to be back.  It was Cindy's first time to be with us and Tom was so pumped that Cindy finally got to come down too.  We were probably just as excited that they were all here as they were.

About three o'clock in the morning there was a strong knock at my door.  I was awake and saw it was Joe Reynolds saying we needed to get to the hospital with JT, Tom's son.  I got in the truck and saw no one.  Then I heard them walking down the lane.  You just knew it wasn't good.  JT had fallen from his bunk bed at the mission house and had hit his head, and even in the dark of the super early morning hours you could tell it was a bad gash, and lots of blood.  He seemed not to occupied with the blood but was very aware of his wrist that he was holding so protectively.  He had fractured his wrist in the fall also.  We got everyone settled in the car and hit the first of many bumps along our horrible roads and we all knew that he was in extreme pain and that it was going to be excruciating for the young boy.

The ride was so hard on JT and his parents, who sandwiched him on either side.  They were trying to be of service and realizing that they couldn't comfort him at any level because he was in such pain.  We all were praying as Joe got us to our destination, which was a private hospital there in La Esperanza.

The Dr. Thelma sewed up his head which was an ordeal for JT but also for the mom and dad as they looked on.  She had to sew up the fleshy part of the wound before she could attempt to get the epidermis to close it up.  Cindy was wonderful in that she didn't pass out.  She would smile at her son and say comforting words to him and when he wasn't looking she would roll her eyes beyond their sockets trying not to absorb what she was having to look at.

After they wound was closed, we went to the x-ray department.  We were all in there with no lead aprons.  The doctor reviewed the x-rays and told us we would have to go to a orthopedic specialist located in Siguatepeque, two mountain ranges over from were we were and about an hour and a half away.  It was still early so they gave JT something for pain and nausea and he rested before the trip to the next doctor who didn't open until eight o'clock. 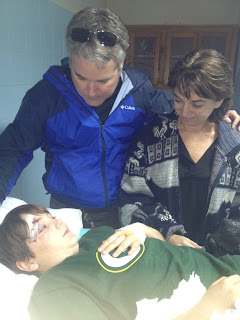 We got to the orthopedic doctor and he had to call in an anesthetist to put JT under so they could set the wrist correctly. He got a nice green colored cast at his request (his school colors) and off we went back up to the mountain to return to our farm and to the team who was anxious to see their fellow team members.

During the drive we received a phone call from the farm.  Apparently, the kindergartners were in recess and Mariela who is six years old.  She has a physical special need in that she can't walk without the help of her walker.  She has just started walking with the aid of her walker this year.  She was in a child's plastic swing that has the protective bar that keeps the child safely in the seat.  She pulled the protective bar upwards and fell out and because her legs could not support her she fell full weight on her elbow.  They told us to meet them at the same hospital that we left that morning.

When we arrived, Jerimiah and a couple of our older girls were there.  We all met in the x-ray room again with radiation filling the air, and held her arm so that they could take the different shots of her arm needed for the orthopedic doctor to see in Siguatepeque.  When Dr. Thelma put them up on the screen, she called the orthopedic to find out what we should do.  He said without seeing the x-rays he couldn't know for sure what to do.  So I had the idea to take a picture of the x-rays on the screen with my Iphone. (technology is amazing!) We sent them to his email, and he said she would have to come in.  So I asked Joe if he was up to another ride and he gave his typical response, "I am here to do whatever needs to be done".  He is such a wonderful servant of God.

So we get to the Dr. Silvo's office again and we have to go get another x-ray because he was looking at something odd that he couldn't figure out and he wanted to be sure before he did the surgery.  So we went across town and had the other x-rays made with some specialized machine and brought them back.  He said that she needed surgery to place pins in the bone that had chipped off in the fall.  He asked me how she fell and why didn't she just catch herself, and I explained her physical situation about her legs.  He asked about why she couldn't walk and I explained her history to him the best that I could.  He then told me that a team of surgeons were coming and that they were specialist in this type of trauma and she could be a candidate for the surgery!  She had the surgery later that night and she did so well.  She slept through with no problems with extreme pain and we left the next morning.

Although everything that transpired in those 28 hours was a little on the wildly extreme, I marvel at the way God helps us through trials.  Even though the events were horrible, we found that a surgical team was coming to an area of Honduras that we would have had no knowledge of if these circumstances had not  happened.  He is so Faithful at every level.

I pray as we go through this new year of 2013, that we all remember just how faithful the Lord is.  When crazy trials come, that we will look for His hand, even in those tough circumstances of life.  It is difficult to remember when our pain, or the pain of the ones we love is so excruciating, that God is there with us.  Jesus said at the the tomb of Lazarus that He knew that God always hears us.  He hears us, He is always with us, He is our God Emmanuel (God with us)  in 2013 and for all eternity.

I listed some phrases about bones below.  One of them that I had never heard was: what's bred in the bone will come out in the flesh (or blood) proverb a person's behavior or characteristics are determined by heredity.  I pray that God's heredity that He supplied to us through His Son to all of us will shine in our behavior and character this new year.

Be blessed this New Year of 2013 from our Honduran Home to your Home.

a bag of bones .the bare bones be skin and bones a bone of contention a subject or issue over which there is continuing disagreementclose to (or near) the bone 1 (of a remark) penetrating and accurate to the point of causing hurt or discomfort. 2 destitute; hard up.cut (or pare) something to the bone reduce something to the bare minimum ( as) dry as a bone see dry .have a bone to pick with someone informal have reason to disagree or be annoyed with someone.have not a —— bone in one's body (of a person) have not the slightest trace of the specified quality : there's not a conservative bone in his body.in one's bones felt, believed, or known deeply or instinctively : he has rhythm in his bones | something good was bound to happen; he could feel it in his bones.make no bones about something have no hesitation in stating or dealing with something, however awkward or distasteful it is : they make no bones about the fact that their scheme amounts to a consumption tax.to the bone 1 (of a wound) so deep as to expose a person's bone : his thigh had been axed open to the bone | figurative his contempt cut her to the bone. •(esp. of cold) affecting a person in a penetrating way : chilled to the bone. 2(or to one's bones) used to emphasize that a person has a specified quality in an overwhelming or fundamental way : she's a New Englander to her bones | he's a cop to the bone.throw a bone to give someone only a token concession : was the true purpose of the minimum wage hike to throw a bone to the unions?what's bred in the bone will come out in the flesh (or blood)proverb a person's behavior or characteristics are determined by heredity.work one's fingers to the bone work very hard : Tracy can work her fingers to the bone, but it's Ms. Green who gets the thanks.

Posted by Honduran Home at 7:21 AM