A Tale About a Christmas Goat

Merry Christmas!  Things were hopping around here for the 25th!  We had invited our Pastor and his wife, and they invited some people.  We invited some friends, and we invited the ministry up the road, and almost everybody came, but that gave us a grand total of about 70 people coming for lunch.

In preparation for all these folks, I decided it was time to kill the Christmas goat.  So I gave the honors to the Botkin Boys and they were all over the idea.  They had never eaten goat, and never killed one either so they seemed to like the thoughts of both.   They Botkin's are a family of 6 persons, who have come to help us with all the 31 girls we now have at the ministry.  So these guys performed the deed with the help of our night watchman, and some of our girls who have had more experience in butchering farm animals.  They got everything done in record time.  They wrapped the goat up in trash bags and put him in the freezer to cool.

Christmas Eve is like Christmas Day in the United States here in Honduras. We had to get all the girls something for Christmas Eve night.  We had already done the shopping for each one of the girls secret friends, a few days prior.  We would carry 10 excited girls to town with 5 dollars worth of limperas in their hot little hands.  They bought a gift for their secret friend and then we would carry them all to the Kios Pizza place and they would watch the flat screen and fill up on Pizza and coke.  Ben Heath was chauffeuring the girls around while Linda Botkin and I were buying groceries and paying bills before the holidays began.  While we were out shopping I noticed a dog running with what looked like a plastic bag in his mouth.  That is not unusual to see dogs in the community running with small trash bags that have been discarded.  As I got closer, I realized he had a whole frozen chicken.  He was having difficulty holding his treasure that he had pilfered out of the back of someone's truck that held the Christmas groceries because his teeth were freezing.  He would run for a few steps, drop his chicken and try another way to get a good grip on the frozen mass.

We have 31 girls now.  We received 3 before I came home for our daughters graduation, 3 were returned to our farm after a one year absence, and one returned when I got back.  The 3 little ones that returned had been kidnapped by their mom from our farm almost a year ago exactly to the day.  We are expecting one more girl this week, which will give us 32 girls altogether.  We almost don't fit in my living room anymore for movie night.  The girls and I had prayed for more girls and we received what we asked for.

Christmas Eve day was filled with pie baking and the organizing of the gifts.  Throughout the year, people have sent down gifts that I put in a trunk called the "The Birthday Box".  We have birthday and Christmas presents that people bring down or send with teams.  We also have things that teams bring that I set aside for the girls for Christmas Eve's Party.  This year a lot of Barbies were accumulated, sketch books, coloring books, markers, colored pencils, clothes of every type and every size.  Some people sent costume jewelry and so I just put it in the pile. The "pile" was in my bedroom.

When I leave the country, my bedroom becomes a catch-all for everything that the staff doesn't know what to do with or doesn't want the girls to know that we have.  When I walked into my bedroom with my luggage and what had been place in there after the last team left, I could barely get through.  We had to make a chart and write down by each girls name exactly what they received so that everyone would get about the same amount of stuff.  Ben Heath, our professional missionary intern,  and Angela Serrit our newlywed, helped me with this 4 hour activity, while Brenda Hernandez, our other older girl, who has graduated out of the farm years ago, who has just been promoted in her job as financial administrator to a wonderful ministry here in country. It is such a blessing to have our older girls come home for the holidays.  We wrapped up the girls gifts in plastic bags and tagged each one.  We didn't have bows or ribbons, just the black plastic bag, but the girls couldn't have been more excited with each bag that was loaded into the truck that would transport them to the mission house.

When we finally got back to the mission house, with the cake, nacatamales, and guava juice, the girls did their secret friend first.  Through all the transporting of stuff, I left my secret friends bag back at the house.  One of the girls will start and give a brief description of her secret friend, and the other girls will guess who they have.  It is a lot of fun.  Afterwards, we eat, and then we open our bags.  We take turns on opening gifts so it really takes a while, but we need to know what each girl got, not only to rejoice with them but so that in case it gets misplaced we will all know what belongs to whom.  While everyone was eating I ran back to the house in the dark, eating my nacatamale to get my secret friend gift, tylenol for one of the little ones, field questions from the new watchman, close up the barn, and made a pot of decaf coffee so I could try my new thermos out.  I ran back to the mission house just in time for the girls to start round two, of the gift giving. It was late by the time we all got back to our houses.

The next morning I told the older girls to wake me up at 5:00 a.m. so that we could get the goat started. I also told the girls staying with me to cover the kitchen counter with wax paper and take the goat out of the freezer and put it on the wax paper.  The next morning, I was awakened by someone tapping on my wooden shutter.  I jumped up because it was 5:30 and I was late.  I ran outside with my two helpers to get the fire pit started.  We had to chop some green oak limbs, and I had the foresight to buy some charcoal.  We finally got the fire going and so I went to get the goat off the counter, except it wasn't on the counter.  It was still in the freezer!  I then grabbed the clorox and washed out the huge brown tub that they had used for killing the goat the day before.  I threw the frozen goat blob into the water, and told Stephanie to bring some hot water from the main kitchen and prayed it would thaw out enough to lay on the coals. 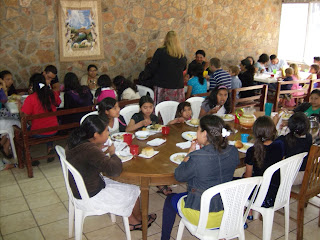 We finally got the goat laid out on the rack and covered it with sheets of roofing metal, while were running back and forth from my house to put the turkey in the oven, green beans on the stove,  and the potatoes in water to boil.  We assembled the jello fruit salad, rolls were rising, turnips were washed and cooking.  Every fifteen minutes during the cooking extravaganza, we ran out to uncover the goat and put some salt water and spices over the roasting carcass.  It was beautiful!  But then we had some people come in and I didn't get to the meat until 25 minutes later and when I came out the door I saw smoke.  My beautifully golden brown grilled goat was on fire!  Thankfully we rescued the meat, but I was sad that we couldn't serve it in one piece.  I literally had too many irons in the fire.   The older girls in the kitchen were cooking deviled eggs, rolls, and cornbread stuffing.  Some of the mid sized girls were keeping all the dishes washed along the way and the little ones scrubbed the potatoes and picked up the trash in the yards, watched after the little ones, and prepared the kitchen for the guests to arrive.  It was a huge team effort all the girls and the staff and that's how we do Christmas at Project Talitha Cumi. 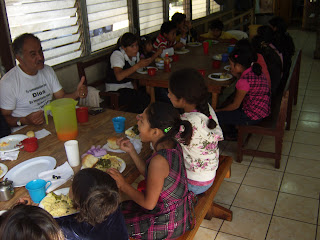 I am writing this blog while laying on a heating pad in my bed, thankful that I can now see the floor to my bedroom.  I am thankful for the generosity of all the teams who sent so many nice things so that we could make a wonderful Christmas for our girls.   I am excited about this new year and with all these new girls.  We have a lot of activity going on here at PTC.  We have a team of 17 coming in 2 days, 3 new house moms are coming and a new teacher also.   So please be praying for us that we will be prepared for the plans God has for us in 2012.  Blessings, the Christmas Celebrating, Goat Cooking Honduran Mom 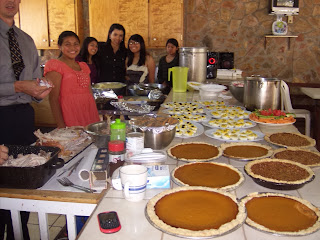