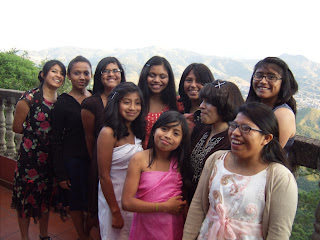 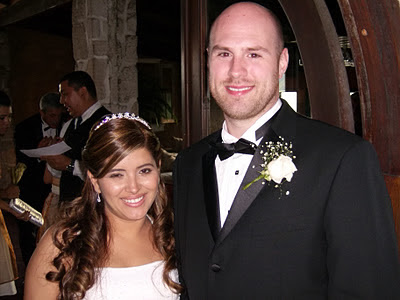 The wedding was beautiful and the Bride was Blessed beyond measure.

I will try to write later about the events .  I have more photos.  I have to pick up a team in the morning so I need to get to bed but just wanted to get these photos posted.

Well, it is a Sunday night and I decided it was quiet enough to finish my blog.  Earlier this evening we had a smores roast with our  'mini team" of two of our board members and their one family member.  They had spent the day playing soccer and I fell asleep here at the house.  We just finished getting 40 people their smores, prayed and the rain started again.  Perfect timing.  Then our new girl started having  some emotional issues and started hyper-ventalating.  I prayed for her and she went back to bed.  So now all is calm, everybody is in bed and the rain has finally stopped.

After the bridal Luncheon, Amanda had to get ready to go to the States to visit her family and to get her visa renewed.  The day after that I left to go to Tegucigalpa with the Patrol paced to the hilt with foam mattresses and air mattresses.  I had all the luggage and dresses for the girls so the only thing they would need on the bus was their pillows and toothbrushes.

We had the rehearsal to go to and get some of the bridesmaids dresses refitted and zippers redone.  From what I could tell the seamstress used zippers for baby clothing.  It was very tiny and had small teeth.  These zipper weren't make to hold any tension that our lively bridesmaid could give out .  I think altogether 4 of the zipper gave way and one held out until the end of the wedding and then started from the bottom to separate. The seamstress was a sweet little lady and was so sweet you couldn't say anything.  The dresses were made well, except for those crazy zippers.

Esmerelda is visiting with us and in December she will move back to PTC.  She will still be studying so she can go to college but meantime she will be taking a technical course in Beauty School.  She drove down with me in the Patrol.  We went to town looking for sweaters for the girls, which we didn't find at all.  Except for some pink number that had huge pink felt flowers attached to the chest of the sweater.  But while we were looking they had a 70% of sale.  They had all of our 13 girls who were attending the wedding, sizes.  They were party dresses.  Before we left, we got some of my dresses and some of the girls church dresses, but they were not exactly what I wanted the girls to wear, but I thought it would be okay.  Esmerelda and I found the dresses and they were like $5.00 a piece.  We were so excited to have a surprise for the girls when they arrived in Tegucigalpa.

We went to the rehearsal on Friday night and had to come back to the city to get some of the bridesmaids last fittings.  One of the zippers broke, so we couldn't pick up all the dresses.  We had to check on the gown that arrived for the bride to make sure it was okay, and then we needed to go back up the mountain for the rehearsal dinner.  We got stuck in Friday night traffic.  The traffic lights were out and so you just had play chicken at all the intersections of a major city. We got back up to the mission house with the rest of the wedding party and played ping pong and drank tea until it was time to go back to the house.

The next day thirteen of our girls from the farm  took our school bus with Natalie, Tim and Ana to La Esperanza, then loaded up into a commerical touring bus to Tegucigalpa.  They took a cab from the bus stop in Tegucigalpa to Angela's house where we were going to be staying.  I ordered in pizza and cokes.  Then part of the bridal party showed up.  We still had plenty of food, and we piled everything in the back room until it was time to sleep. We arranged a place for Tim and Ana to stay for the night and said good-bye to them, as they were going to be going to the airport in the morning.   Meanwhile, after everybody changed into pajamas, my girls were teaching their Honduran sister how to dance the Cuban Shuffle for the wedding and The WALK or WOP.  I could never really understand what the name was.  After the dance rehearsal we spread out the mattresses, blew up some of the mattresses.  Angela's house looked like a refugee house for flood victims.  Thankfully everyone was tired and we all went to sleep. 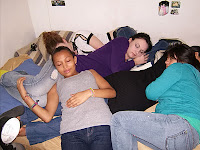 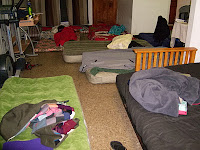 The house was full of chaos the next morning.  I had baleadas and fruit for the girls the next morning, and then we started doing the hair and showers and everything else we had to do to get ready for the wedding.  Another zipper broke on the bridemaids dresses so we sent
Natalie to the dressmakers to get it fixed. 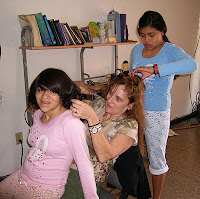 When we arrived for the ceremony one of the zippers of the  younger bridesmaid's dress gave way when she put on the dress.  I went to the bathroom where she was located and just sewed her up.  I told the mom that she was going to have to cut her out of the dress but she would be the most confident of the entire group that her dress was not going to go anywhere.  I ran out the door from the ladies room and got in line to march out and I forgot my camera, until I was seated.

The wedding included the civil service was so beautiful.  I love Honduran weddings.  The bride and groom and wedding party, sit more than they have to stand.  The service was very sweet and then Kansas kissed the Bride and it was end of the wedding, but the beginning of a great life they will have together based on the Word.

We had a great reception, the girls looked wonderful and the Bride was beaming.  But then we had to go home.  The wedding planner let the man who chauffeured the girls, go for the evening.  So we had to put all the girls in the Patrol and go down the hill and through the city and prayed that no police officer saw our driving condition.  The girls laughed all the way down the mountain.

The girls got up early at 4:30 the next morning.  We sent two older girls to get us 4 taxis and they left to the bus station stuffed like sardines in a can.  We were right behind them in the Patrol with all the stuff and the extra folks of the Bridal Party including Brenda and Any.  We all arrived safely in La Esperanza, zoomed home and dropped of the girls and turned around and picked up the Botkin family who had arrived from the States to help us here at the mission for the next year.

Life is never dull here.  We love it and are thankful that God has called us here.   We are all thankful that everything went well with the wedding and transport.  God is faithful and we are thankful for that.  I pray you have a wonderful Thanksgiving Day  Blessings,  The Happy Thankful Mother of the Honduran Bride.

Posted by Honduran Home at 9:20 PM