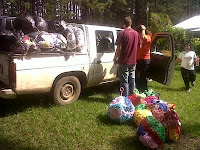 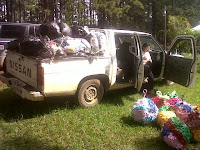 This is our Grinchmobile filled with pinatas, candy, rice from Children Against Hunger and clothes. Day of the Child is tomorrow, September 10. We have to st
art early to get everybody seen about. The girls made 12 pinatas for a community service project for school. Ben took pinatas to the different schools and the local feeding program. Amanda, me, and some of the other girls went down to Yasi carrying our pinata and candies. Both trips were physically taxing. The little girls who couldn't make the Yasi trip and some of the bigger girls went with Ben. The rest of the girls who weren't on the Trouble Train (Ben's
after-school program :) went to Yasi with us.
After the fires the weeds on the trail have been overwhelming. I was walking along and all of a sudden, I was looking skyward on my back. Amanda heard me say "Oops" and turned around but I had already hopped back up. We continued through new corn fields. It was sort of scratchy but we continued until we got to the school.
We sang songs, did little animated dances with our songs and then played Duck, Duck, Goose. The kids burst out laughing when I got chosen along with Amanda and their teacher to chase after the children. It takes a lot of doing to get this group to burst out laughing. After all that physical activity, I noticed a little twinge coming back up the mountainside. I think it was the last go round of the goose chase, but I almost had the little sucker tagged. Well, I was reminded of our ministry motto. "You gotta be tough if you are going to be stupid" as I was going back up the mountainside with young people who thought they were in the Honduran version of "Last of the Mohicans". The scene in the movie is where the heroes are walking/running, hot-foot up the Smokey Mountains, trying to rescue the damsels in distress. My entourage were not rescuing anybody, but they were on a mission to get to the farm before lunch started. NOTE TO SELF. Don't travel during the lunch hour up the mountains with 5 motivated, hungry young people . Bring sandwiches
So I am nursing my twinge and praying as I go upward. It was a good time to do so,
because the girls were so far ahead, I was alone, so I could pray aloud that God would get me back up the mountain without having someone having to retrieve me from below. Praying out loud hiking up the mountains is kind of liberating. I made it back to the farm ( to God be the Glory) and got home and got my shower, took my Motrin and Valerian Root capsules, rubbed down my back with "old lady muscle aspercreme" , whipped out the heating pad, laid down on my bed and prayed that I could be mobile for the next day. God is so good I was mobile by supper time.
The next day we had to run to town to get several errands done. I had been looking at some pitiful goats who needed rescuing from a lady that had them in a very small area in her back yard. She knew nothing about goats apparently and out of her 5 goats, three of them
were crippled in their feet because she had not trimmed their hooves. I only wanted two, possibly three of her females. She wanted out of the goat biz and said she wanted me to take them all or none. I had been trying to get in contact with her and I just ran into her store and she happened to finally be there. She agreed for me to come get the goats that day. So Amanda and I went back to the farm, and got "Ben the goat herder" from our last goat rescue. Ben is a great guy and a good sport, because he doesn't really have huge fondness for goats or bugs. I appreciated his adventuresome spirit to go with me on my goat deals.
Don Juan, our male goat 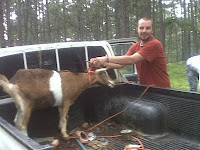 was purchased with an injured back leg last October. He had been hit by a car while he was crossing a newly developed 4 lane highway. Ben rode in the back with another farm helper for 2 1/2 hours watching to make sure this huge goat didn't fall from the truck. Don Juan recuperated and has thrived here at the farm and has been the father of many. I thought I would capitalize on Ben's prior knowledge of trucking goats and I grabbed Norma and a farm worker to go rescue the goats.
We were racing around trying to beat the rainstorm that was threatening to fall from the sky at any moment. When it started raining large drops I prayed fervently that God would hold the rain off until we got the goats loaded. We had to literally drag the 5 goats to the truck through a maze of homemade fencing, and two huge vicious dogs, who were trying to bite the goats through the fence. The owner was saying "the goats are afraid of the dogs". I guess so... I was terrified of them too while they were charging their fenced area trying to bite whosoever through their wooden enclosures. The rain held off until we left La Esperanza. When we 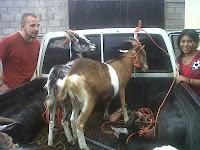 got closer to home we realized it had already had the daily downpour and we missed it. We felt victorious in our prayers over the elements. Well at least the folks who were riding in the back of the truck were feeling victorious.
We had to tie up the three crippled goats so they wouldn't hurt themselves in the back of our small truck. We knew going into it that putting 5 goats in the back of the truck was a little dicey. One of the goats even had a broken leg that had a cast on it. Anyway, we had to put him in the back seat of the truck with Norma. I was going to do it, but she volunteered, and I ended up riding in the back of the truck, with Snowbelle, and our Honduran worker, because Snowbelle, who is not white but the color of an mature woman's untreated hair, had gotten free from her ropes. Celbin, the Honduran worker, was guarding two of the tied up goats who kept getting their ropes to tight around their necks.
We all smelled like goat and were looking forward to getting a shower. We unloaded the goats and got back up to the house with a sense of accomplishment and a scent of goat that was stronger than our accomplishment. We get out of the truck on to find that the electricity was out, so that meant cold showers. I have taken a lot of cold showers, but because I was cold and had been wet, I heated up water in a tea kettle on the stove and carried another pot partially filled with water to take my shower/bath/rinse off. I still smell like goat, but I felt sanitized.
When I finally got some instant coffee and sat down, I realized that my back should have been screaming. I hauled goats, loaded goats, drug goats, rode in the back of a truck over a very
bumpy road with goats and I was fine. God is good to me, even when I forget I was supposed to be nursing my back.
God watches over me even when I don't watch out for myself. I am thankful for all the huge blessings He has sent our way. Blessings, the Goat Wrestling, Rescuing Honduran MOM
Posted by Honduran Home at 3:48 AM