A Funny Thing Happened on the Way Back From the Mechanics 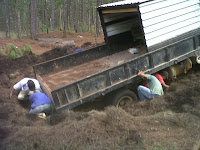 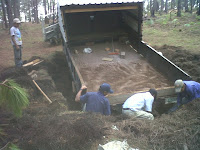 I was in la Esperanza at the mechanics with the Nissan little truck, when I get this call. My workers decided to move some dirt with the truck without permission. I wouldn't have given permission since they don't know how to drive and because none of them have a car or license. They drove to the back of the farm where I had filled in an adobe pit with pine straw last year to keep my baby goats from falling in a 10 ft x 20 ft hole of water. The crew was getting dirt for a back fill for the foundational floor of the duplex.

They backed up to the pit and shovel the back end full of dirt and proceeded to tell the youngest in the group to pull up. Unfortunately, it was left in reverse and not first gear and what he thought was a brake was the clutch he started rolling and then gunned the accelerator to make it go forward but drove it backwards so hard that it buried the trailer hitch (which is 2ft x 3 ft metal plate where the ball joints fit) into the dirt on the other side of the hole.
Clayton one of our new interns, got the tractor and I got into the truck after we literally dug out the flatbed from pressurized pine straw, and pulled it out. I remembered Brett's terragator days and we laid limbs under the wheels and used a heavy chain that we tied in a knot on back of the tractor and around the main frame of the Isuzu. We had all the hondurans stand on the tractor which made the tractor look like a mama possum while the men were hanging on to each other around the body of the tractor. I prayed aloud before we started that those things that were bound would be loosed in Jesus name and voila' it came right out .
I was ready to tell the crew that they were fired. One was saying the youngest boy did the driving, but I knew that wasn't right. So I talked to him first, and he said he drove it into the hole but the other worker, who is about 24 he drove it back to the hole and was the one who left it in reverse. But he was so brave when he was talking to me. He took the credit for any wrong doing. He said " I have learned a hard but important lesson today, not to touch things of importance without getting permission from the owner". He was so sincere all my thoughts of firing the lot of them melted. The 24 year old when confronted with the truth, wanted to say it wasn't so, but just hung his head and said "I did it. It was me". So in front of them all, I just thanked God and told them it could have been worse. The very dry dry pine straw didn't catch on fire when they where spinning the back tires so fast desperate to remove the truck before I got back from town. It should have caught on fire because it was sitting in a pile of very dry straw. I told them we were all going to work on this problem until we got it solved. When the truck finally pulled out, I was driving the flatbed, I watched the faces of the men when the truck finally started to move. They all cheered and slapped each other on the back. I just wish I had an extra hand to snap my camera at that moment. God helped me to see that the men, and how they felt about themselves, were more important than the truck. I am here ultimately for the people, and the stuff that is here to help us, is just that "stuff". "Stuff" is not eternal, people are. God is good to us all the time. Signed Down in the Dumps, But Not For Long, Honduran MOM
Posted by Honduran Home at 12:21 AM