Well, my chickadees are leaving the nest.  Mary is in the US on a scholarship.  Cinthia is registered with the University that Rosey is going to.  Sonia is going to take a LPN class (first year) with Lizzy and Estephania (second year students) in La Esperanza.  It is really exciting about all the plans that are being made for the girls.  The others have opportunities to get scholarships, but meantime they need to be studying while they are in the country.  There is no way that I would have thought all this would happen, but God is bringing everything together.

Yesterday, I brought Mary through customs and it was so easy. So many people were praying for us and we really saw the prayer in action yesterday.  Mary and I were amazed.  Her mom and her younger brother got to go with us to the airport to see her off, which was really special.

During my twenty years here at the mission, I never promised any of the girls that they would go to the United States.  We always felt like they would study there in Honduras, and some have and some still are studying. But obviously, God has different agenda and His ways are so much better and higher than what my mind can think of.   I am thankful for everyone of you that came and helped us over the years, encouraging the girls to pray for what God had put on their hearts.  Their faith has been built and so has mine, and I clearly stand amazed. 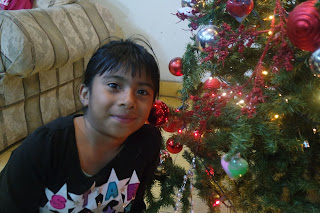 We have several girls in the 9 grade now and we are trying to know how to proceed with them.  The covering we have been using to get the girls accredited for college is not in the area anymore.  We need your prayers to know how to continue.  They have to be registered by February.  Pray that God would help me know how to do this.  I want to do the best by the girls but He has the ultimate word.

WE have been buying things by bulk and because sometimes the girls like to get into the 2 lb bags of sugar, boxes of cornflakes and other grocery items, the older girls and Rosa  started putting things in my room and in a trunk in my bathroom.  Well because of this action, I had a ROUS, "rodent of unusual size" running about in my room at night.  Every night I would hear him getting into something.  I would get up and put the light on and find where he had been, but I would never find him.

This past week I finally saw him.  I reached over and cut on my bedside lamp and he was up on a ledge over my closet and scurried down the wall   I just had no idea rats could do that, and I had no idea how large he was. I was un-nerved about how huge he was and that he could locate at any point in my room including my bed.  I was trying not to let fear have control, but I slept with my light on, since that seemed to hinder his moving about.  He was destroying so many things, including bags of food, and clothing and he was costing me a good night sleep.

I put out poison, sticky traps ( which he just promptly scraped off) and a metal trap, which was useless.  I tried peanut butter, cheese, and other tasty things, in the traps, and he would eat the little goodies I left and escape.  He got out of all the traps I had laid for him.

A couple days before I left, I heard him in the office.  I closed the door, and Kenia and Sonia and I got in the office.  I was determined to get this situation taken care of.  He was trapped in the office, but not trapped yet.  So like the office, it is a catch all for all the nice clothes and shoes that the team sends.  WE had new girls come through, so the suitcases were in the office with the stuff the girls needed, but with all the activity around the farm, with graduations and other situations, they had not been put back.  We had to get some space to move, and so I sent out Sonia with the items.

We closed the door and the huge rat ran over Kenia's foot.  She had on flip flops.  I sent Sonia to go get us some boots.  We got everything off of the floor and then proceeded to look behind the filing cabinets and pulled them to the middle of the room, so we could see clearly.  Then we started moving things out of the room.  WE got it taken care of and Kenia found him lodge between the middle of the wall and the bookshelf on our office desk. I got a broom and punched him down and he ran towards Kenia and she jumped, but when she came down, her boot landed on him.  He was still alive, and it was as long as her foot!!  She was getting weirded out because he was moving under her boot.  She didn't want him to escape again wounded and come at her.  She was not heavy enough to apply pressure and so I stepped on her rubber boot with my weight and it seemed to do the trick.  I think we caught him because he was exhausted.  Anyway, the ROUS (rat of unusual size, (Princess Bride) died that day. WE were grossed out, but victorious and thanking the Lord that was over.  I was so thankful for the courage of Kenia.

I was thinking about that disgusting rat.  I thought about the areas in our lives that we need to change, are just like that bothersome rat.  I don't know why but when Christmas season get going so do the stress levels.  There has been a lot of different attitudes that have developed on the farm lately. There has been so much going on.   We have been so blessed and we even recognize that those attitudes were wrong, but still those "rattitudes", remained.

We don't realize the size of what is going on to disrupt our lives.  It destroys so much while we let it run free, and costs us our peace of mind, sleep, relationships and so much more.  Eventually, fear gets in the door, then the torment really begins.   Until we get a determination to go through and get our spiritual boots on and clear things out of the way that are blocking us finding the problem,  so we can see a situation clearly, and seriously stomp the cause of all the destruction.  Keeping our spiritual light on will deter the darkness, but we have to take action and pray and ask God to help us crush those rattitudes under His feet. i pray that as this Christmas season approaches, that we will get things cleared up and cleaned up, so that we can be a blessing to others this holiday season. 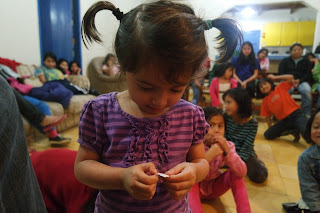 Thanks to everyone who has helped us with this mission.  WE have our little pregnant mama, who has had a great report.  She only lacks about 6 weeks. Thanks for the prayers this year about the graduationsl  I thank you for the contributions for the girls who are going to the bilingual school.  It looks like we might have another grade open up for next year and it would be great if more  could girls could go to the Abundante Life School also.

I am thankful for Jake Compaan and his wife Rachael.  They are the directors of the Abundant Life Schools, and they have helped us with so much these last few months.  I am so thankful for this couple who have come along side our mission.

Thanks to Chris Briles, came all the way from Texas, just to share in the girls graduations.  It was so special having him here.  Thanks to Vonda his wife that kept their ministry running, while he was here ministering to our girls.

Pray for my girls to be safe while I am away getting Mary Settled in the United States.  Thanks again for all your love and support towards the girls of Project Talitha Cumi. 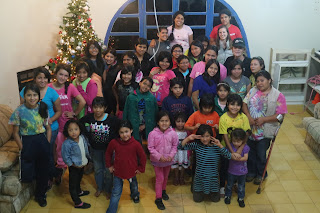 Posted by Honduran Home at 3:41 PM No comments: