The New Bus, The Port, and Agent DeMonio 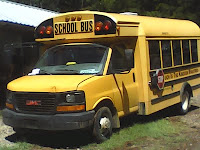 This blog is taken from my newsletter for the month of June.

The room was very nice but we were on day three of hot days and no change of clothes. I would have gotten some clothes but they said we were leaving. We showered and put on the same clothes. When I went into the bathroom I noticed a bee on the bright white towel and so I killed it in case the girls didn't see it, I didn't want them stung. I woke early in the AM and went into the bathroom. When I opened the door there was over 50 bees. Not just honey bees but killer bees and they were mad. I immediately thought about the bee I had murdered the night before. I wondered if they sent out the hit squad. I went downstairs and left everyone sleeping.
I found a watchman that was about 4 ft 2 in tall and told him my problem. I asked for another room. He wasn't authorized to do that. I asked to just be able to used another bathroom, again he was not authorized. I asked for an insect spray. He said they had some but it was in the bodega and he didn't have the key. I eyed the small fan and I asked if I could borrow it run the bees out and return it, he said it wasn't his to loan. The phone rang and I sat down to wait, trying to think of any other petitions he might could authorize, when I noticed a movement out of the dry fountain that was in the lobby. It was a huge crab and it walk right under the opposite sofa. I got up off of my sofa. Thankfully the phone call was from the owner asking if any customers had come in. The watchman told him about my problem and the boss gave the go ahead to give us another room. I could tell he wasn't happy about the bees or the lack of response on the part of the night watchman.
We got to the port early and they ask me for gas money. I told them I gave them money for that. They said, "Oh that was for my car". "Sweet," I thought, but I must of had a look on my face at this point and Mr. Demonio said, "I will take it off my fee". They went and put deisel in the engine, however, it was a gas engine, so then they had to pay a mechanic to drain the tank and lines and put in gas. Ben was in his hard hat trying to help push all this through, but they finally got everything done and it was time for the port to close for lunch! We waited an hour more under the shelter with our hard hats. When they finally gave us the out, we were first in line, and we bolted through the gate. Ben, the girls and I were euphoric.
The bus is wonderful and we can get all the girls in there, not to mention we don't need a CDL license which none of us have. We went back to our forsaken, abandoned, patiently waiting South Carolina team. They were great and had been so busy while we were away. God had taken care of everything. All I had left to do is get the tags for the bus, but that story will have to wait for another day. :)
Blessings to all who have been so helpful to our ministry. Thanks to Randy, Rich, The South Carolina team, The Botkin family, our wonderful interns, the board, and everyone of you who pray for us. We are blessed and I pray He bless you exceedingly abundantly more than you can think or ask. Blessings, Pam and the girls from Talita Cumi.
Posted by Honduran Home at 11:03 PM 1 comment: